A Cypriot Vine In London 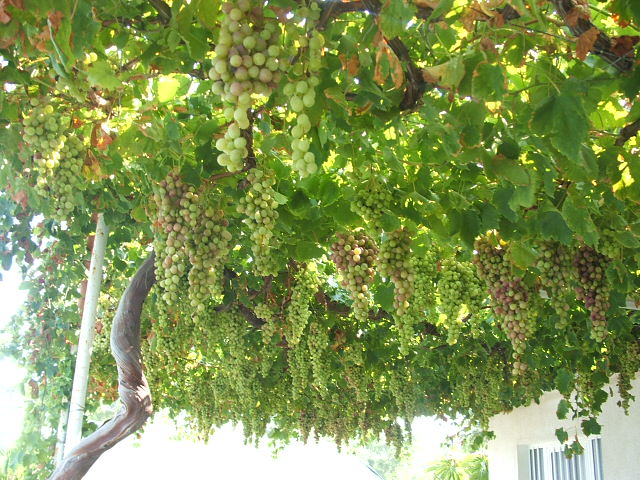 08 Jul A Cypriot Vine In London

Posted at 18:41h in News by Cultivate WF
0 Likes
Share

On a recent trip to the Languedoc region in South West France, it became quite obvious that buying fresh, locally grown produce was standard practice amongst the locals. In fact, in most regions of France, outside of Paris, many families grow and harvest their own fruit and veg and herbs, and of course eat what they grow.

I remember growing up as a kid of Cypriot Turkish parents in Walthamstow, and becoming accustomed to the fresh mint and parsley we had growing in our back garden. It was regularly used in salads, to make tea, in traditional Turkish dishes and then dried out to last through the winter. One year, following one of our annual trips to Cyprus, my mum brought back a cutting of a grape vine. She lovingly tended this cutting, being the green fingered kind of lady she is, and after planting it in a sunny patch, it grew to a huge grape vine tree, covering a quarter of our garden! My uncle had to build a metal scaffolding style frame even to hold it up. Each year the vine produced tiny red grapes, a bit sour but perfect for cooking down and making a thick syrup to use in desserts. But most importantly, it was the leaves that were key. If you’ve ever eaten Dolma/Dolmades – stuffed vine leaves usually filled with a mix of rice, mint, lemon juice and tomatoes, or a mix of minced lamb, tomatoes and rice, then you’ll know exactly how essential they are to the Cypriot/Turkish/Greek communities. Particularly those living away from home, in a new land, without the usual creature comforts to remind them of home. 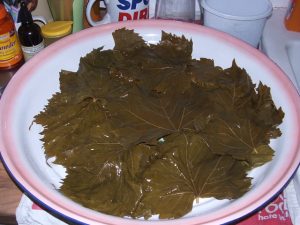 The leaves were at their best from June to September, where they would be picked to use fresh or set in a salty brine in large jars for preservation. They were also rolled up in batches and frozen too. In order to prepare the leaves, my mum would first rinse them in cold water, then she would have a pot of boiling water on the stove and a pot of iced water next to it. She would also have a large tray on the side. The washed leaves would be dipped in the boiling water for about a minute, where they would soften and go floppy, change colour slightly and then be dipped in the ice water to refresh before finally placing on the tray while the others were prepared. 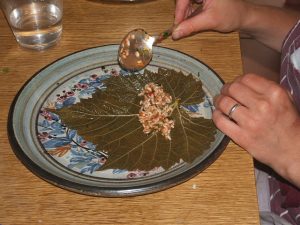 It was a long process making the dolma, as my sisters and I can wholeheartedly testify to, since we were always involved in the making process. Once prepped, the leaves were laid out and the mixture made. Then, like traditional women in the village, we’d sit round the table (hopefully with the sun shining outside) and roll those leaves. Once you got the hang of it, you became quicker at rolling and so counting how many you made against your mum’s quickly growing heap! 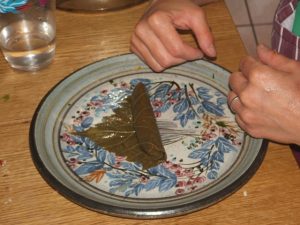 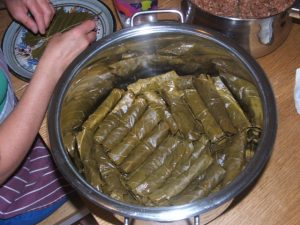 The grape vine lives on today, as do mum and dad and is now at the ripe old age of 40 years old! The most wonderful thing about watching my family cultivate their own produce, and this included my grandad with his carrots, potatoes and giant marrows, as well as my uncle and his courgette flowers, was that it instilled a real love of food and eating well. Today, my kids have a very healthy and varied appetite with an equal, if not more so, love of good food from all around the world.

The great thing about vine leaves is their versatility. Even though I grew up eating them stuffed, they could also be used to wrap around fish ready for the bbq or even laid at the bottom of a pot before placing stuffed ones on top, to create a sort of blanket and avoid a few casualties in the cooking process. You can even use them to cover over rice, to steam the rice well.

Growing your own produce, as in other parts of the world, is now becoming a trend more so in the UK, particularly in London, where even a window box in a tiny flat can mean fresh herbs and tomatoes. And if rising prices in food and living costs isn’t enough to spur us on, maybe the new Brexit will give us a little push in the right direction. And if you have a neighbour that grows a vine, I urge you to befriend them, you never know, they may just let you have a few.
©Hulya Erdal